How a seaside town became Britain’s capital of macabre

A Great Article By Tom Ough For The Telegraph

There’s nothing like a seaside jaunt to remind you of the omnipresence of death. Goths, ghosts, vampires, ruins: Whitby has them all. Even its local stone, behind spectral shop fronts, is literally jet black. The town hosts a goth weekend twice a year, one of which took place last weekend, and may as well leave the skeletons and spiders out for Hallowe’en, a festival that is to Whitby as Christmas is to Lapland.

Why are goths drawn here? Is it two-for-one on black leather trench coats? Are The Sisters of Mercy locked in some deathly revival circuit of the professionally undead, broadcasting in heavy rotation on local radio?

Neither: you can blame Bram Stoker. Or you can thank him, if you’re one of the locals. “The goths are really nice,” a church guide told me. “And they bring lots of money into the town.” The ghoulish Victorian – Stoker, not the church guide – came up with the Dracula character while visiting Whitby and, in the eponymous novel of 1897, had him land here. And yes: it was a novel, a fact unknown to the tourists who regularly ask where Dracula is buried. 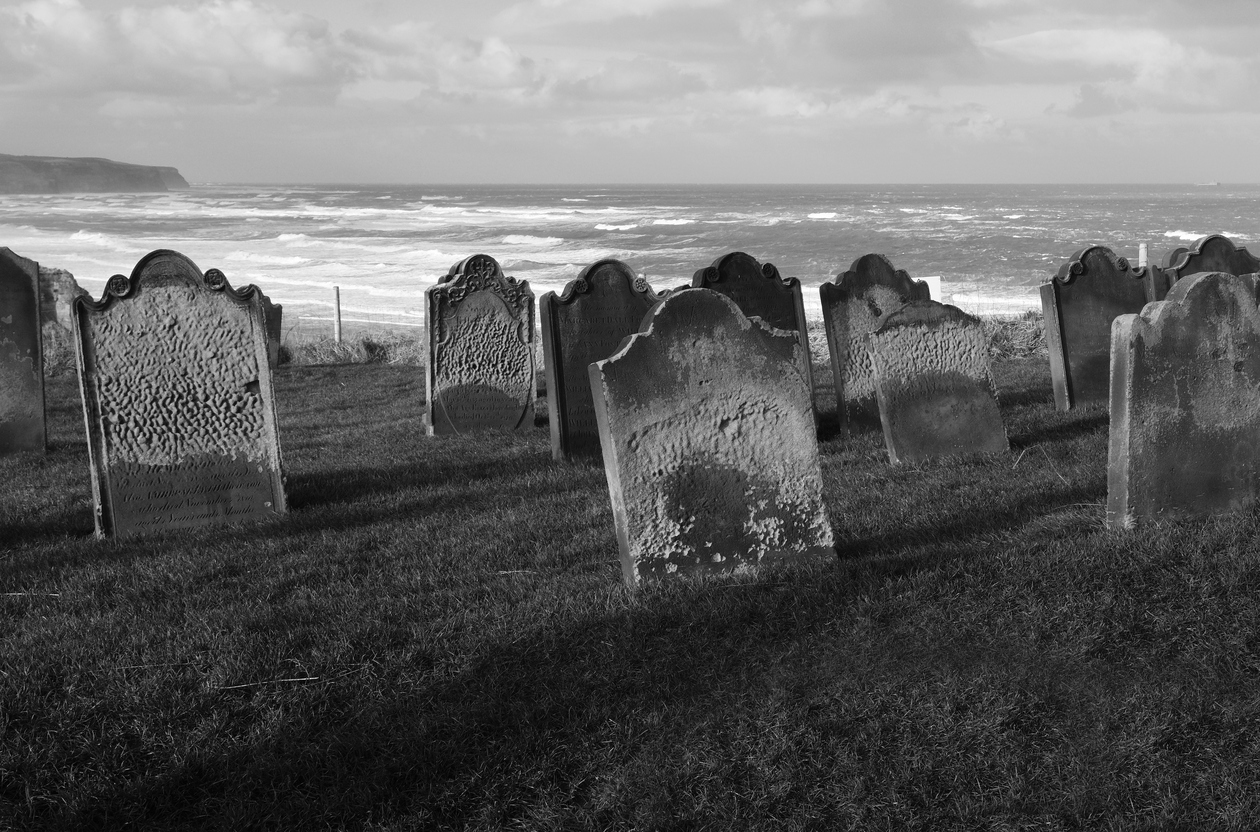 As Stoker had realised, Whitby was already a good place for a horror story. It’s a smallish harbour town overlooked by Whitby Abbey, a 1,360-year-old ruin that was sacked by the Danes, then stripped by Henry VIII, and now stands in splendid desolation at the top of East Cliff. Most of the abbey is lost but the few remaining columns and arches are Ozymandian: huge, intricate, but incontrovertibly ruined. Though of course the head of Ozymandias lay in desert that we can assume was blissfully warm compared with this wind-blasted hilltop. Bring a coat.

Speaking of lone and level sands, you can see the sweep of Whitby’s flat, stark beach from up here, but before you head down the 199 stone steps that separate you from the streets below, go and see the Church of St Mary. A short way from the abbey, it’s best known for its elegant upper tier of box pews. Football and religion have been compared before, but this is the first time I’ve seen a Northumbrian church prefigure Newcastle United’s 1990s addition of an extra tier to St James’ Park.

If you can talk your way on to that upper tier – don’t joke about being up in the gods – look out of the big seaward window to the little orange buoy about a mile out to sea. When a church was founded on this site 1,100 years ago, that was where the shoreline lay.

Ever since, the North Sea has been chomping away at Whitby’s coastline. In 2000, a landslip took the cliffside right to the edge of the graveyard. In 2013, another landslip sent macabre contents of said graveyard tumbling down the hill and into a local’s garden.

What with the landslides and the sackings and the vampires, then, Whitby isn’t the kind of town you’d want to make your final resting place. It’s fine for a day, though: just remember to bring the garlic.

There are two: Tate Hill, on the east side of the river Esk, is smaller and sheltered, and allows dogs all year round. West Cliff is much bigger, with room for beach huts, deckchairs, and donkey rides.

2. The fish and chips

The Magpie Café was the best of a good bunch, but it was gutted by fire in May and currently only does takeaway. We ate at The Star Inn The Harbour, a pricey newcomer. Best value is perhaps Quayside, the chippy on Pier Road.

You can take a steam train to Whitby and back on the North Yorkshire Moors Railway. Trains set off from Pickering and stop at Levisham, Newtondale Halt, Goathland and Grosmont.

What’s open on all sides, but closed on weekdays? Whitby Abbey – from November 6 until next April, you’ll only be able to visit it at weekends.

It is definitely worth the 199 steps. Promise.

Visit the Captain Cook Memorial Museum (he was an apprentice here before setting out to sea) and the RNLI Museum if you can. The local must-see is the Whitby Museum: huge, eccentric, and the owner of a Hand of Glory, cut centuries ago from the arm of a hanged felon before being pickled.

Whitby is particularly good for antiques and sweet shops. Try Den of Antiquity for the first, and Justin Chocolatier for the second.